Long time no post, folks. So, here's what happened over my past weekend...

Shelly was out of town for the weekend on a very rare and well deserved time away from us. But this meant I was forced (FORCED) to care for our children.

Julie was invited to a b-day party at a nearby roller rink on Sat. The girls have never roller skated. And, it's been almost 30 years for me since I last put roller skates on my feet. Needless to say this was hilarious (not). Actually it was cute and fun. The girls did as well as can be expected for their first times on skates. I was trying as hard as hell to remember how I learned to skate and couldn't. So, I basically sequestered them to a little practice area. I felt bad for Julie as she couldn't be out skating (or trying to) with her friends/classmates. However, the girls still said they had a good time, regardless. I tried not to freak out too much whenever either took a spill. Julie came home with some nice looking bruises too. We'll have to try and get back so the girls can try skating some more.

Yesterday was pumpkin carving time. I apparently let them pick designs that may have been a bit more difficult considering neither has done the actual carving before but they managed to do a pretty good job.

It's going to be a chilly night for them tonight but at least it's not snowing like it did 20 years ago.

I picked up Rocksmith (Ubisoft) for the 360. This is not just another music rhythm title. You don't use toy controllers with buttons to approximate playing an instrument. You need a real guitar (any as long as it has a pick-up and has a quarter-inch jack) to play this "game". There is a bundle that includes an Epiphone Les Paul Jr. (I think), but I bought the "regular" version which is the game, a specialized instrument cable, and a page of numbered stickers that you can put on your guitar fretboard (for beginners). I already have a guitar, a PRS Hollowbody II. Well, actually, I have three guitars, but we won't really go there...

More on the game itself in a bit. I want to talk about this cable. It has a 1/4" connector on one end (like a traditional guitar cable) and a USB connector on the other. Between these two ends, there's a fast-disconnect section so you don't accidentally yank your console onto the floor if you unwittingly reach the end of the cable (11' in total length) and an in-line ADC (Analog to Digital Converter) of some sort. It converts the analog signal coming out of the pickup(s) to digital signals that get used in the game. What's cool is that you can use this same cable to connect your guitar to your computer via USB and then record your guitar with any audio recording app. that lets you switch your input to the USB device. When plugged in to Win7, the cable showed up as "Rocksmith USB Guitar (something something)" in the Device Manager. Pretty neat.

Back to the game, it's still a rhythm game in so far as any song requires following the rhythm to play along with it. But, where it deviates from traditional rhythm games, is that you are eventually playing along to the song with the real notes, riffs, and chords if you're able to play well enough. The game automatically adjusts the difficulty level dependent on your progress as you play along to a song. The first song I played in my "journey" (aka career mode) was The Rolling Stones' "(I Can't Get No) Satisfaction". At the start, I had to just alternate between the F# and A notes in the song's opening riff. If I could hit each note correctly, as the song moved on, it kept adding more notes of the riff a note or two at a time. By the end of the song, I was playing that riff in tune and on time along with the song.

This is the kind of game I had hoped would eventually come along when games like GH and RB started coming out. They seemed to have nailed it pretty well. Hopefully, they can get more songs as DLC. Maybe they can convince those artists that looked askance at GH and RB because they still seemed too game-like to reconsider for this game since it's also basically teaching you how to play a guitar to some extent.

Shelly had to take Sophie to a birthday party yesterday afternoon so that left Julie and I to our own devices. Julie kept hinting that she wanted to go out for lunch and then make a stop at the American Girl store at the "Maul(ing) of America". (DEAR GOD NO!)

As Shelly was leaving with Sophie, I tried to remind her to leave Julie's booster seat but didn't get the words out in time. I figured she'd either think of it on her own or not. And, if not, we'd figure something else out. Like, sitting around for two hours glaring at each other. You know... fun stuff.

Well, turned out there was no booster seat left behind. What to do, what to do? I told Julie what the deal was and that if we were to go out to eat, we would have to do it by bike. And, she was up for it. She suggested we stop at the library on the way home. So, we biked to Chipotle and then biked to the library before returning home. She did really well on all of it. Never complained and generally seemed to enjoy all of it. Mileage-wise, not as far as a round trip to Lake Calhoun and back. But, all the same, I'm just happy to see her enjoying something as active as biking.

Later on, while Sophie watched an "Olivia" DVD, Julie started watching the first episode of the History Channel's "The Universe" series from a few years ago. The first ep. is about the sun. I kept looking at her face to gauge whether it was interesting or over her head. I thought I caught her looking sleepy or bored so I asked if it was boring. She said that she was enjoying. Unfortunately, we were only able to get about 40 minutes into it before dinner was ready.

Ten years ago today, my wife and I promised that we would love and care for each other in front of our friends and family. That ten years has come and gone in a flash. We've definitely had our ups and downs. But, I can definitely say that I love her more than ever before. She's been a stellar mother to our children and puts up with all of my BS!

What more can a guy ask for?

What's new out there, kids? It's been a long time since I've blogged anything meaningful. Looking back it looks like it was way back in October... Wow. That's like a lifetime ago.

The whole family spent 10 days in Hawaii in December to attend my brother's wedding. We had a great time. We got to see old friends again and met some friends for the first time. We also got to spend time write my brother's new in-laws. His wife's family were very nice people.

Once again, and it may have to do with visiting during the winter, I wondered what it would take to move there. Heh.

The only sad thing that happened was that Shelly's last remaining cat, Daisy, passed away. We were sad at the loss but weren't completely surprised as she was an old cat.

RandomCub, we now have a dog as of january. Fred is a rambunctious five month old chocolate lab. It's really like having a hybrid infant/toddler in the house again. Something that I hadn't considered when we got him.

Sophie turned 5 in February. She'll be starting kindergarten in the fall. No, I don't know where the time went either.

Julie continues to truck along at school. She's academically ahead of most of her classmates so we've (meaning "shelly and julie's teacher") have worked hard to keep her engaged to prevent boredom. Julie is also playing the lead character in a little school musical.

My work life is still very much an unending to-do list.

See you next time.

Posted via LiveJournal app for Android.

So, I mentioned I'd post more about what I've been playing in terms of games lately. Here's the poop, Scoop!


OK. There is more that I've played since I last made any mention of games. But this post is getting long... and I need to play The Witcher some more (see what I did there?)...

Oops, I sent the last one before I had saved my changes. Yes, I am still waking up!

I'm guessing that this will get posted twice...

While attending a couple recent shows, The Wedding Present and The xx, I attempted to take some pictures with our Canon PowerShot SD1000.

I enjoyed taking photos at the show but I knew the Canon wasn't really up to performing well in that type of environment. I have to admit I was jealous of my wife's new Canon DSLR (sorry, model escapes me). I wanted something that would perform almost as well as a DSLR but not be a burden to carry. So, I got the bug for a micro four thirds camera. I was willing to live with any image quality and manual control compromises if it meant I'd get a better performing camera that was still relatively compact.

But which one to get? At this time, I think the only candidates are either from Panasonic or Olympus. I didn't really have $800 or more to spend so I was willing to compromise on some features. Plus, I wanted a built-in flash. That left only one option, the Olympus PEN E-PL1. 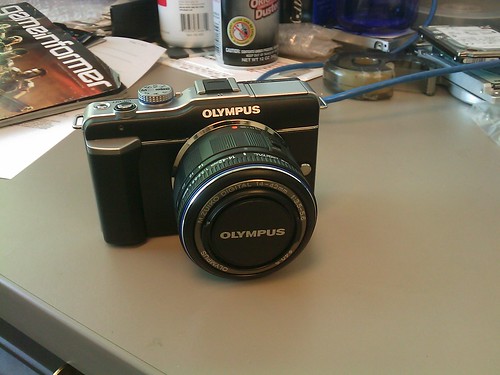 (taken with my HTC Touch Pro)

But, you know what? I didn't go to either place. I went to a local store that specializes in camera and video equipment, National Camera Exchange and Video. I knew they had a price matching policy so I was OK on pricing. The biggest benefit to buying from them is that any new camera purchase includes free entry into four of their photography seminars. I would get some lessons on getting the most out of my new camera that I would probably never get around to really doing on my own.

They offer 3 classes on DSLRs but my vouchers can only be used for the first two levels. Which ended up working out to my advantage again, because Shelly and I are going together. We'll both get to learn more about our respective cameras.

The first-level seminar that fit into our schedule isn't until the end of June. But, in the meantime, I've been taking any chance I can to play around with my camera. I've been doing a little bit of reading to at least understand the rudiments and just generally messing around.

It's been fun so far.